Amyra Dastur has always been known to voice her opinion in subjects that matter and are relevant. This time is no different. The ‘Tandav’ (2021) actress has surely been doing her bit by giving back to society during this pandemic which has affected and displaced millions of Indians.

The Mumbai based starlet decided to initiate her own CSR activities by stepping up and lending a hand to the families in need. Instead of simply donating money to notable NGOs, Amyra has been doing her research and helping those who have no shelter or support from these big charitable organisations.

She has been tapping small scale NGOs who are not privy to big donations and helping them gather funds and attention to feed those families who have no source of income to put food on their tables on a daily basis.

She also has been assisting those households who have more mouths to feed, in other words, families with lots of children. “3,200 rupees is all it takes to feed a family of 4 for as long as one month! I urge everybody to help and donate in any way they can to these families but to also carry out their homework and help those NGOs who are working on a small scale without a well known face or corporate backing.

The smaller NGOs are the ones who need donations and they’re often overlooked because they aren’t as well promoted or as popular as the bigger NGOs but I know for a fact that the small ones make the biggest impact. We should pay attention to small NGOs and do our research while helping COVID stricken people and families. Our efforts pooled together will surely make a difference to the world in the long run” says the actress as she signs off.

As a celebrity, Amyra feels it is also her responsibility to shed light on households who have lost their main income earners due to the pandemic among others who are in need and we can’t agree more. She’s managed to send food to 30 families. 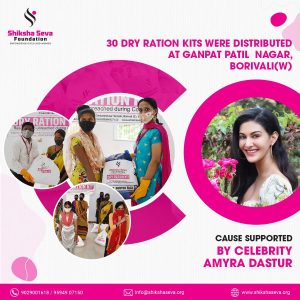